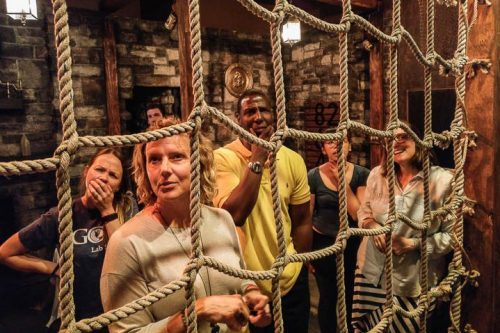 Escape Artistry was featured in an article on The Chicago Tribune's website! Read the entire article, by Lauren Zumbach here.

Escape rooms across Chicago say they’re ready for customers. For those unfamiliar, groups pay to be locked in a small room, where they must solve puzzles together and use various props to exit.

At Escape Artistry, owner Maren Rosenberg , said she’s not interested in virtual rooms. She said since her escape rooms are heavily story-driven, the atmosphere would be lost digitally. “We just don’t feel like at least at this point, we can do it elegantly enough to make it worthwhile and we want to make sure people get the full immersive experience,” Rosenberg said.

But, no matter the format customers choose, she said supporting one of the local escape rooms helps all of them. “It’s very much like a rising tide lifts all ships. We all have a vested interest in everyone’s products being really good because if someone loves my escape rooms, they can only play six,” Rosenberg said. “But then I can go ’Oh, go over and check out what they’re doing at Fox in a Box.”

Read the entire artcile on THE CHICAGO TRIBUNE, Chicago Escape Rooms Are Once Again Open For Business.

Our friends at the Chicago Tribune stopped by to chat about gifting in 2020! Our virtual experiences let you adventure together, wherever your team may be.

Going into the New Year, we are proud to be an honored recipient of the 2019 Better Business Bureau Torch Award for Ethics!