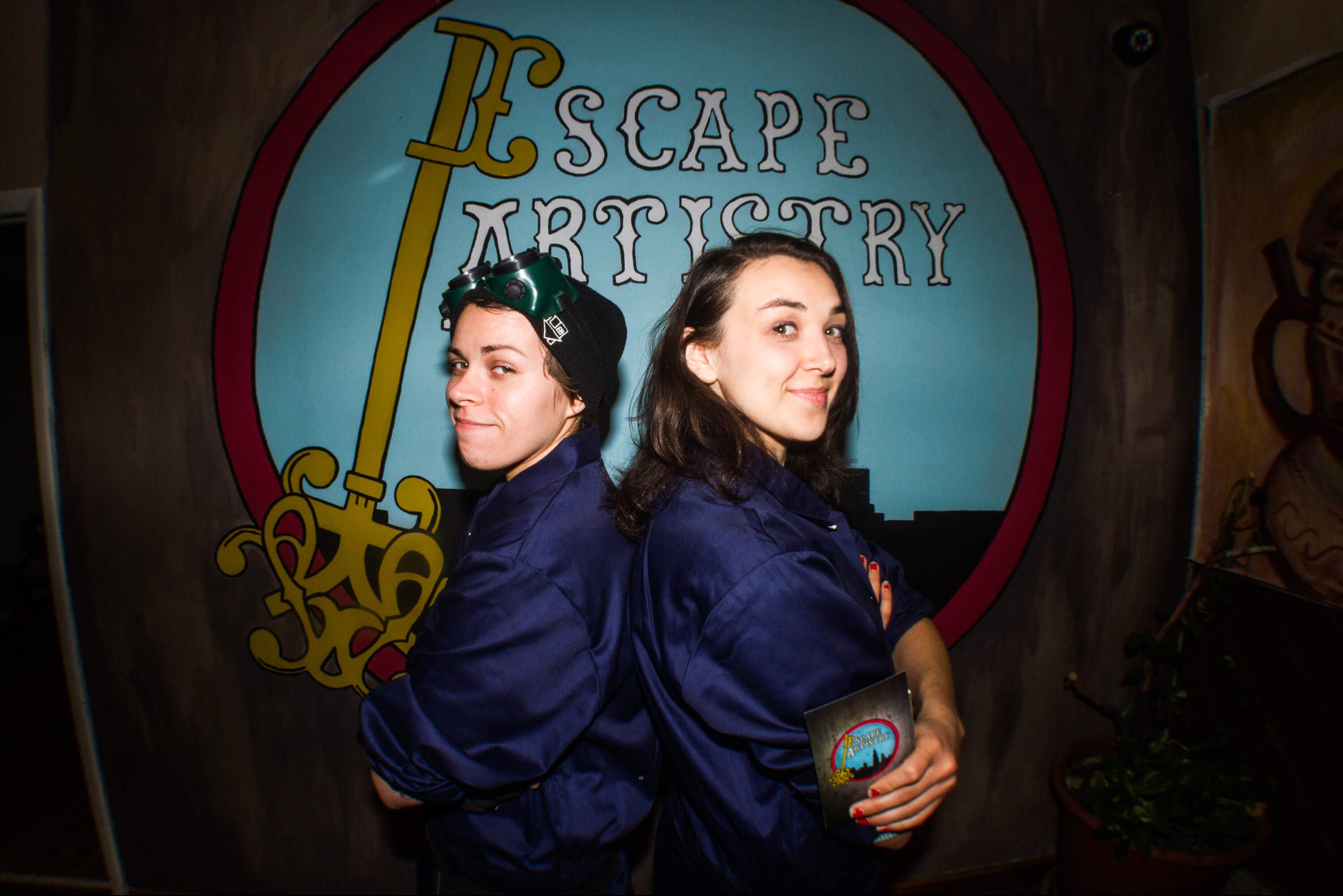 Escape Artistry was featured on My Chicago Podcast! Read the article and listen to the interview, by Carrie Rubin here.

Today we’d like to introduce you to Maren Rosenberg, owner of Escape Artistry in Wicker Park.

Maren, can you briefly walk us through your story – how you started and how you got to where you are today.
In December of 2013, I worked to open Trapped in a Room with a Zombie, the first room escape in the City of Chicago. In 2014, I traveled across the US, opening other Zombie rooms – managed the Chicago location, and oversaw the managers of other locations. That September, Melissa Schlesinger came to play the room, did an excellent job, and introduced herself to me as a set designer with a deep understanding of and strong interest in the work needed to create the experience – the next month, she was hired. March 2015 came around, and I had the idea to start a boutique sister company focused on becoming part of the fabric of the city and heightened artistic value. That April, Melissa and I took a room escape road trip to broaden their horizons. There, we discovered we can co-exist for long periods of time in small spaces, that we have similar interests and complementing strengths, and came up with the name Escape Artistry as an encapsulation of our new company’s function and goals. For the next eight months, we worked together to design, build, and open The Railcar in Wicker Park in November 2015– Escape Artistry’s flagship location. The business was strong, and over the next year, the field grew more crowded and Escape Artistry was approached by investors interested in partnering on an expansion. This January, the Time Gallery a seven-minute walk from The Railcar’s Flat Iron home, was opened. The Time Gallery is a suite featuring five rooms – three of which are currently running, and two more which will open in Summer 2017.

We’re always bombarded by how great it is to pursue your passion, etc. – but we’ve spoken with enough people to know that it’s not always easy. Overall, would you say things have been easy for you?
The biggest external obstacle – which is also probably the least interesting and least unique – was getting permits from the City of Chicago. Dealing with bureaucracy and permits is frustrating and difficult, particularly when opening a non-traditional business: are we a performance venue? Are we an arcade? A team-building facility? An event space rental? An art gallery? A teaching facility? Yes!

As such, it was incredibly difficult for the city to classify us and determine what permits we did and didn’t need, and what zoning we could and couldn’t occupy. We ended up with a PPA, (as if we were a three-story dancefloor or a strip club), and so had to schedule a handful of inspections that were ultimately painless but less than relevant to what we do. It’s very easy to pass a plumbing inspection if you have no plumbing. However, it’s very frustrating to be told you can’t open your business without this inspection being passed, despite there being no plumbing in your facility, and even more frustrating when you have to schedule this inspector to come to your facility to inspect something that isn’t there, and then the inspector isn’t able to make it and reschedules, which delays you getting the license.

Internally, we had to overcome obstacles created by our own habits and backgrounds. Coming from theatrical backgrounds, we needed to adjust our minds to the difference between writing a theatrical story or building a theatrical set and creating something that will be touched, investigated, and experienced by a wide variety of people with varying degrees of comfort and energy. Naturally, when you first let people experience things, you learn a lot. For the first two months after every room opened to people beyond friends and beta testers, things broke…or didn’t break enough. Can it be opened by grandma, who’s joining the family for a Sunday afternoon outing, while being strong enough to hold up to the rowdy bachelor party from the night before? And – more importantly – was there time in between session to reset and fix things?

With The Railcar, we learned how to curate and adjust the experience based on groups’ different personalities. From the frequency of clues to the language used to discover ways to encourage those who are struggling without feeling too easy to the highly competitive, to maintaining an atmosphere of fun while keeping people (and the objects they’re manhandling) safe and secure.

We’d love to hear more about your business.
We are a Room Escape company. A Room Escape is part of interactive theatre, part scavenger, and part live-action video game. Immersive entertainment. A group of players is ‘locked’ in a room and has an hour to find clues, answer riddles, and solve puzzles – and each room has its own story that justifies the time limit, the setting of the room, and the existence of the puzzles. For example, when guests arrive at the Railcar, they’re welcomed to the year 2050 and given a brief refresher on the history of the last several decades. They board a train car, only to find that the train has been hacked by a mysterious entity, and will crash into the city in sixty minutes if not stopped by solving a series of elaborate puzzles and riddles the hacker has hidden throughout the car as a fail-safe.

We are known for offering Room Escapes in Wicker Park that facilitate team building, family outings, private experiences for groups, and public events for like-minded strangers. Our Room Escapes focus on story and creating an immersive, detailed world.

Escape Artistry is proud to be a locally owned, managed, designed, and operated company. We are proud to have a team as diverse as the city of Chicago, and we seize on our many opportunities to give back to Chicago – be it through doing fundraisers for local non-profits, using environmentally conscious building materials, promoting local business, and working with Chicago artisans.

Everything we do is focused on the city – the narratives are tied into Chicago history, the people who we work with are based here, contributing to the local economy and artistic community. Because we have an artistic collective, we draw from the experience of a number of artistic forms in nontraditional ways: we blend media arts, visual arts, and live performance to enhance even the more functional elements of gameplay (explanations of rules, etc.). From a guest perspective, this sets Escape Artistry apart: these artistic touches show a thorough commitment to making sure that every element of the experience is tied into a central aesthetic and storyline, making it fully immersive. Employees are in costume and character as Time Gallery Mission Specialists from the moment guests arrive to the moment they leave, and all elements of design are tweaked to make sure they exist within the world we’ve created – from announcements in the lobby’s speaker system to the language in the box office to the decorations in the hallway.

What were you like growing up?
Growing up, I was full of contradictions. I was fiercely independent but would worry if my parents were away from home “too long”. Apparently, I embarrassed my mother a great deal when I was an infant. I grabbed a pair of purple lamé underwear in a department store while riding in a backpack – when we left, my mother’s bag set off the security alarm. Though the security guards didn’t think my mother was trying to steal anything, we were asked to leave the store because I screamed without stopping when the lovely underwear was taken away from me. I was a tiny person who knew what I wanted!

Despite this love of things that were shiny and pink, I dressed myself in my brother’s hand-me-downs and hated wearing shoes. I was shy, but also frequently started conversations with strangers. As I got older I fell in love with performing and started working professionally as a theatrical actor when I was seven years old. I loved to play make-believe, get lost in details, sing, dance, eat raspberries off the tips of each of my fingers, and drink the juice out of cans of black olives. I stopped eating meat when I was five because I loved animals and continue to be a vegetarian to this day. I love stories but hate reading. I loved school until reading and writing became an important part of school, and then I couldn’t stand it… in the first grade, I was diagnosed as dyslexic. I was the first person in my class to learn the ABC’s but I couldn’t read it off a page – I just memorized the song and sounds.

Even as a youngster I wanted things to be fair. I didn’t like when anyone was left out, or someone got more than someone else. That said, I was also fiercely competitive. I was a sensitive kid and would easily be angered or saddened to the point of tears, but I was also often totally fine if you were to check back in on me in 5 minutes. As I got older I always had different groups of friends I would circulate among. I was lucky to have friends between my neighborhood, school, and working in theatre of many different backgrounds, ages, points of view, etc.

In some ways, I don’t know if I feel like a ‘grown-up’. Nor did I specifically feel like ‘a kid’. Now I’m 30. I still enjoy cartoons. I make stupid jokes with my creative partners and have to be told to pay attention. When I ‘was a kid’ I played chess, and while in high school organized a clothing and goods drive that sent over 1 ton of goods to Sierra Leone after the civil war in the early 2000’s. I said I was full of contradictions growing up…but it seems like that’s still true!

Cast your Vote in the Time Out Chicago Love Awards

It's time for the Love Awards!! Time Out Chicago is asking the public to vote…

Can you beat the clock at our top-rated Chicago original escape rooms? Pirates Dungeon, a network of spying grannies, or uncovering a radioactive nuke.

Chicago Escape Rooms Are Once Again Open for Business