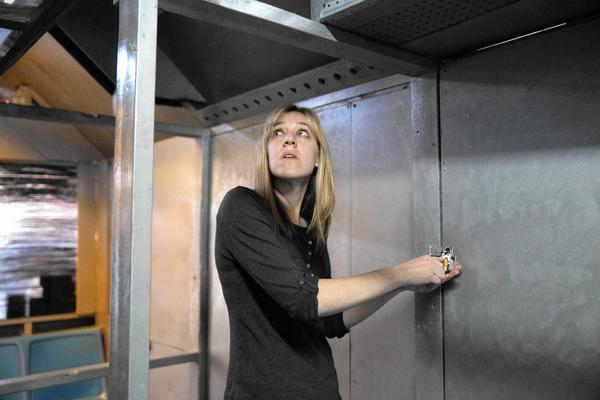 Escape Artistry was featured on My Chicago Podcast! Read the article and listen to the interview, by Carrie Rubin here.

WWR Article Summary (tl;dr) The Escape room boom has made its way to Chicago. At Escape Artistry in Wicker Park, owner Maren Rosenberg and lead designer Melissa Schlesinger created a replica of a CTA blue line rail car and challenge players to escape from the car in an hour, before the train derails. Escape Artistry / The Railcar

Behind the door of a room in Wicker Park's historic Flat Iron building are five friends who are trapped, desperate for means of escape. They jiggle combination locks, testing one permutation after another. They mutter riddles under their breaths. They study complex diagrams. They trace their fingers across the walls, feeling around for hidden clues.

"It's a math problem!" shouts Nina D'Angier, after cracking a clue. "Hey, Math Guy, come here." She tosses a marker to her husband, Aaron, the group's math expert, who begins scribbling numbers on a whiteboard.

They have one hour to escape the room, and the clock's ticking fast.

Part theater, part game, escape rooms have taken off across the globe, and while they aren't a new concept in the U.S., they are fairly new to the Chicago area. Those who sign up for the attraction, typically a group of about 6 to 12 members who pay about $25 to $30 each for admission, must attempt to escape a "locked" location in a set amount of time, using nothing but mental skill.

Once players are inside the room, many puzzles present themselves, with nearly each riddle or labyrinth connected to another clue. The last solved clue may reveal a physical key, which unlocks the door of the room and frees the players.

But the storytelling is just as crucial as the clues, and players often enjoy their experience most when there's a theatrical tale behind why they're trapped in the room. Players could be stranded in a room among zombies, or trying to attempt a prison escape, or, in the case of the Wicker Park location, trying to free themselves from the rail car of a derailed elevated train.

"You've gotta have the rooms be 70 percent Hollywood. People are buying a story. (People want) trap doors, secret passages, the 'oooh's,' and 'ahhh's,' the Facebook picture at the end," said Marty Parker, CEO of Bucket List Productions, a corporate team-building company. "When someone's asked Monday morning what they did over the weekend, they're going to say, 'I trapped myself in a room with a zombie.' They're not going to tell you they figured out a puzzle."

He opened Chicago's first escape room, Room Escape Adventures, in the Fine Arts Building in 2013. The company has eight locations across the country and grossed about $2.4 million in 2015, Parker said.

Since Parker's company focuses on corporate team-building, he introduced escape rooms to Chicago as an exercise for offices looking to use the attraction to foster team-building skills among employees. Escape room staff members either observe players problem-solving from inside the room or outside through camera surveillance, and can offer evaluations or group-led discussions following players' escape, assessing how well the players collaborated with each other to survive.

But groups of friends and families began requesting access to the attraction for bachelor and birthday parties, or even just a fun night out.

"We won't turn them away," said Parker, whose famous 'Trapped in a Room with a Zombie' attraction has been licensed to 25 locations worldwide. "But we will still give them an analysis of their team-building skills."

The effectiveness of escape rooms in enhancing teamwork skills among work colleagues, however, is inconclusive, said Goran Kuljanin, an assistant professor of psychology at DePaul University.

"I think there's a disconnect between how (escape room) activities are accomplished and how workplace activities are processed," he said. "Team strategy, goal development, utilization of team members, you don't use those things in the same way across different activities."

There are currently about 3,700 escape room companies worldwide offering about 8,000 different themed rooms, according to Escape Reviewer, a company that tracks escape rooms globally. The U.S. has about 628 locations and more than 2,000 themed rooms, and at least six rooms in Chicago, Parker said.

Escape rooms originated in Japan in 2011, and were modeled after off a video game requiring gamers to escape from different rooms. The concept of a "real life" escape room quickly spread across Asia, and SCRAP Entertainment Inc. opened the first American escape room attraction in San Francisco in 2012, Parker said. SCRAP is known for holding large-scale escape "games" in massive venues, and their 'Escape from AT&T Park!,' event in San Francisco involves 2,000 players searching for clues and solving puzzles in the baseball stadium in order to escape a monster attack, according to the event's website.

Escape room boomed in 2015, and the global market is now so saturated with different escape room venues that Parker predicts the number of new businesses will wane in 2017. Opening escape rooms was more affordable a few years ago, as it now costs about $60,000 to $100,000 to open a fantastical room that can compete with others.

At Escape Artistry, the Wicker Park escape room venue on Milwaukee Avenue, owner Maren Rosenberg and lead designer Melissa Schlesinger created a replica of a CTA blue line rail car and challenge players to escape from the car in an hour before the train derails.

Schlesinger was inspired to create the train-themed escape room after she was robbed by teenage boys on a CTA train over a year ago, and was left bruised, bleeding and angry from her attack. Creating the room helped her turn a negative into a positive, and Escape Artistry claims to be the only 'locally grown' escape room in Chicago since most others are owned by companies outside of Chicago.

Escape Artistry has different challenge levels, and its staff members, who oversee the players through surveillance cameras outside the rail car, will often provide extra hints through a monitor inside the car if a team is struggling to find clues. But the D'Angiers and their friends, who tried the escape room last month, are all seasoned escapees. Their flair for problem-solving and knowledge of cryptic ciphers freed them from the rail car with just over 2 minutes to spare.

"We're kind of obsessed with these," gushed Nina D'Angier. Rosenberg said her favorite part about running Escape Artistry is watching strangers, all trapped in the same room, work together to solve their way out.

"Sometimes it's the book club from Naperville and the arts kids in Bronzeville and two tourists from Bangladesh. Sometimes, it's multiple generations of people," she said. "This brings them all together. They suddenly have something in common."

Chicago Escape Rooms Will Lock You Up For Fun

Can you beat the clock at our top-rated Chicago original escape rooms? Pirates Dungeon, a network of spying grannies, or uncovering a radioactive nuke.

Chosen as one of the best escape rooms in Chicagoland by Basharoo.com, Escape Artistry is the perfect outing for friends, families, parties, and travelers!
Recent Posts
Archives
Categories
Meta